Hit enter to search or ESC to close
Blogs 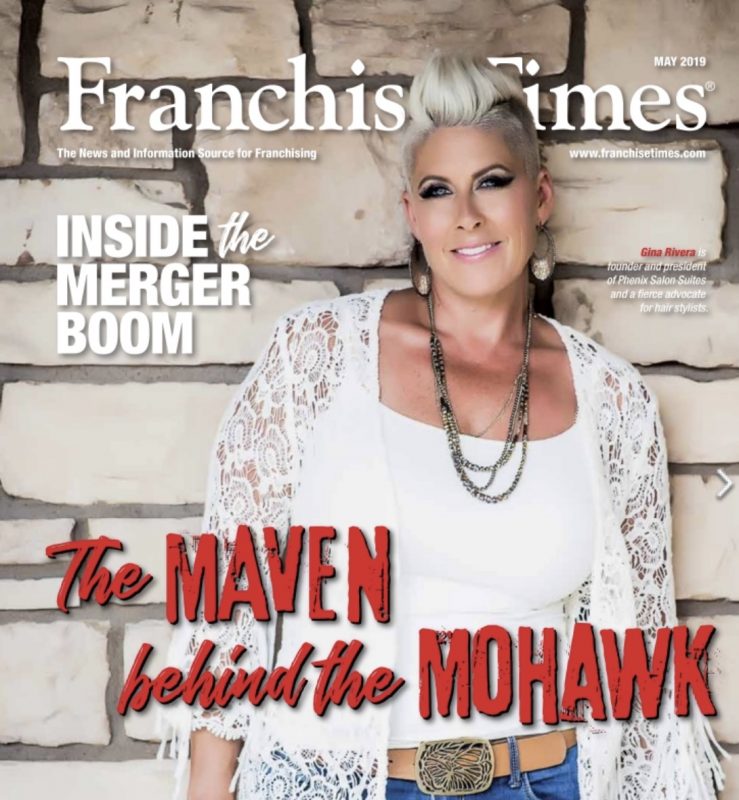 Franchise Times magazine recently sat down with Phenix Salon Suites Founder and President Gina Rivera to get to know “the maven behind the mohawk.” In the April cover feature, Rivera sheds light on her background in the beauty biz, what inspired her to create Phenix Salon Suites, and what salon professionals and Franchise Owners can expect when partnering with her company.

Phenix Salon Suites launched its first franchise location in 2009 after Rivera experienced little support or flexibility in her own experience as a stylist. “I wanted to bring the salon professional at the center,” she says. “It’s about them. When you see them in their suite and they have their own business, I want them to know they’re a part of it.”

The company she built from the ground up has since exploded, opening nearly 250 locations and employing more than 5,000 salon professionals in seven years. Rivera is at the forefront of revolutionizing the beauty industry with Phenix Salon Suites, named after her oldest son.

In an interview with Modern Salon earlier this year, Rivera talked about her experience opening the first Phenix salon in 2007. “Once we opened, the idea was well received [any] fear subsided,” she said. “I knew right away that I wanted to build multiple locations. I had a deep passion for creating an opportunity that would allow salon professionals the chance to open their own businesses at a fraction of the cost of owning a full-scale salon.”

These days, in addition to growing the Phenix Salon Suites franchise business, Rivera is expanding a new product line under her name, which includes the launch of a new color line next year. “I’m very protective and very passionate about my brand,” she says. And for good reason. Rivera’s hard work and business smarts have earned the respect and admiration of countless salon professionals across the country. You can read the full Franchise Times piece on Rivera here.

Ready to partner with one of today’s fastest-growing property management franchises in the health, wellness and beauty industry? Find out how to get started with a Phenix Salon Suite franchise here.

Copyright 2022 © Phenix Salon Suites. All Rights Reserved.
This information is not intended as an offer to sell, or the solicitation of an offer to buy, a franchise. It is for information purposes only. An offer is made only by a Franchise Disclosure Document (FDD) in those jurisdictions that require it. Currently, the following states regulate the offer and sale of franchises: California, Hawaii, Illinois, Indiana, Maryland, Michigan, Minnesota, New York, North Dakota, Rhode Island, South Dakota, Virginia, Washington, and Wisconsin.  If you are a resident of or want to locate a franchise in one of these states, we will not offer you a franchise unless and until we have complied with applicable pre-sale registration and disclosure requirements in your jurisdiction. The information contained in this website is not inconsistent with our FDD. This advertisement is not an offering. An offering can only be made by a prospectus filed first with the appropriate state regulatory agencies. Such filing does not constitute approval by those states.